I am sad to report the death of our colleague and friend Paul Mason who died in August.

I first met Paul and his wife Lyn when they attended the 10th International Symposium on Circumcision, Genital Integrity, and Human Rights held at Keele University in 2008. Paul was a family law barrister with over 3 decades experience and a member of Australian Lawyers for Human Rights and between 2007 and 2010 was the Tasmanian Commissiner for Children.

He had suggested that there was a need for an organisation that worked to protect all children, male, female and intersex from unnecessary genital surgery. The chosen name was Genital Autonomy and the organisation was launched at a press conference in London the day before the 2008 Keele Symposium with Paul as joint patron together with Dr Comfort Momoh.

Below is a video of Paul’s presentation at the press conference.

I was on the organising committee for the symposium and we had invited the UK Children’s Commissioners to attend the event. They all declined the invitation as they were attending a convention in Ireland. Undaunted, on the second day of the symposium Paul caught an early flight to Ireland, attended the Commissioners meeting, told them what they needed to know and flew back the same day.

Paul was also the foundation Chair of Australasian Institute for Genital Autonomy (AIGA). AIGA was founded in May 2013 on the first anniversary of a court decision in Cologne (Köln) on 7 May 2012 of “Re: Dr K”, where a District Court held that genital surgery on a child without any therapeutic need is a breach of the child’s human rights, and an assault at law. In December of 2012 the German Parliament (Bundestag) under intense political pressure passed a law to make legal what was illegal. That law has yet to be tested against the Human Rights Protections guaranteed in the German “Basic Law” and against the European Convention Human Rights and other Human Rights treaties to which Germany is a party.

In 2012 Paul and I were both on the organising committee of the 12th International Symposium on Law, Genital Autonomy & Children’s Rights in Helsinki, Finland during which Paul led a team who drafted and published; The 2012 Helsinki Declaration of the Right to Genital Autonomy.

Paul presented at the 15th International Symposium on Genital Autonomy and Human Rights, organised by Marilyn Milos of Genital Autonomy – America, which was held May 4-6, 2018, in San Francisco, California. Colleagues who attended said that he seemed a little weak, but otherwise sharp as a whip and just like himself.

In August, Steven Svoboda, Attorneys for the Rights of the Child circulated the following information:

“In July 2018, an international team submitted to the United Nations a report on circumcision as a human rights violation, capping nearly two full years of work. The team, the International NGO Council on Genital Autonomy, is intervening as a third party non-governmental organization. This particular report focuses on Canada and will shortly be posted to the ARC website. The submission of this report was shortly followed by some very sad news. As previously reported, one of the team’s core members and most active participants was my friend Paul Mason, who sadly passed away in August 2018.” 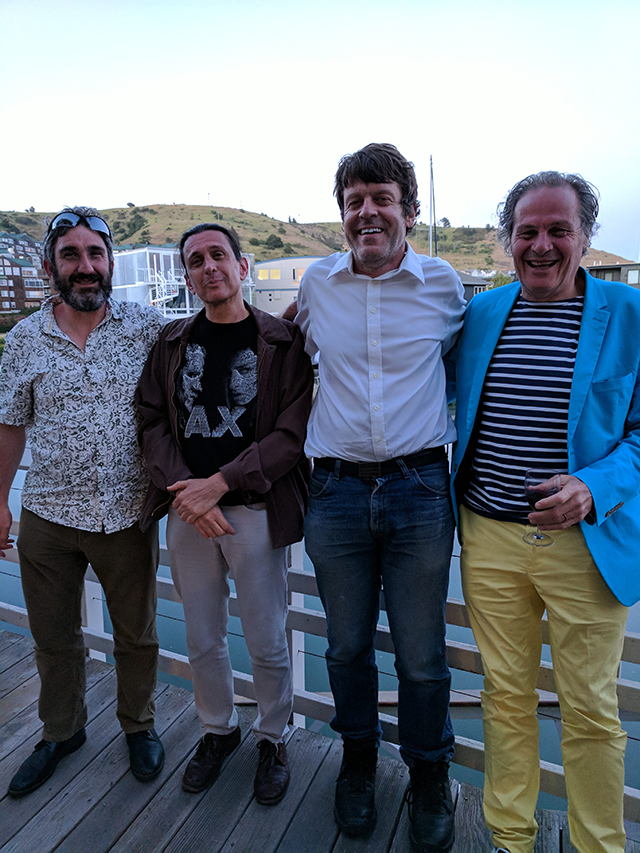 In the picture above are four team members, from the left, Antony Lempert, Avshalom Zoossmann-Diskin, Steven Svoboda, and Paul Mason, taken on May 7, 2018 at Steven’s home following the Symposium. In addition to these four, Kira Antinuk, James Chegwidden, Lena Nyhus, and Tim Hammond also co-authored the report.

Paul was tirelessly supported in his work by his wife Lyn who shared his passion for child protection. Lyn has been a registered nurse for over 40 years. She has worked as an advocate, academic and educator focusing on people of all ages with disabilities, and in aged care and Indigenous health. Her understanding of primary health care and the rights of voiceless people in society underlines her commitment to the right of every child to informed consent for elective cutting of their genitals, without regard to sex, religion or culture. Together they were a formidable team.

Paul was a colourful character in every sense of the word. He will be remembered for his flower power suits, his sense of humour, his love of life and his no-nonsense approach to child protection. He is a hard act to follow and will be greatly missed.

“Unnecessary genital surgery on babies is said to be cheaper and easier than on adults. All abuse of babies is easier. They are powerless and history will judge us by how we protect the powerless. I say let the children decide for themselves – all in good time.”

This entry was posted in Uncategorized. Bookmark the permalink.